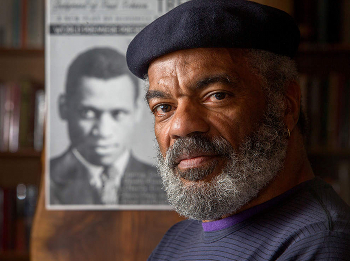 “He was about freedom of choice, freedom of speech and the ideology of labor rights and social and racial equality.”
— Hershell Norwood, writer of
“Fell the Tallest Tree: Judgment of Paul Robeson”
Hershell Norwood, a Eugene playwright, has written a new work about singer, actor and civil rights activist Paul Robeson. The play will be presented as a staged reading at Tsunami Books on Saturday. The author hopes to take it to the New York stage. (Brian Davies/The Register-Guard)

It will be a world premiere at Tsunami Books at 8 p.m. Saturday when Eugene playwright Hershell Norwood presents a staged reading of his new play, “Fell the Tallest Tree: Judgment of Paul Robeson.”

After introducing it here, “I want to put this play on the stage — it’s at that point,” Norwood said. “Ultimately, I want to see it on the professional stage, in New York.”

That goal is not a pipe dream.

A previous Norwood play, “Billie’s Blues,” about the life of famous black singer Billie Holiday, was one of 12 chosen from a field of 2,000 scripts in 2008 by the Downtown Urban Theatre Festival in New York City and was performed at the off-Broadway Cherry Lane Theatre in Greenwich Village.

“Billie’s Blues” was headed for an off-Broadway run, but when a pledge of support failed to materialize, it fell $8,000 short of the goal needed to finance the opening, Norwood said.

The new play, “Fell the Tallest Tree,” is a recounting of the life and accomplishments of Paul Robeson, an African-American singer, actor, civil rights activist and McCarthy era political target. Robeson’s rich bass voice became an American icon with his rendition of the song, “Ol’ Man River,” first in London and later in a Broadway revival of Jerome Kern’s musical, “Show Boat.”

Norwood — who holds advanced degrees and has experience in acting, directing and playwriting — takes a serious look at the many facets of Robeson’s life. It is set at the moment of Robeson’s death in 1976.

“It’s a dream, taking place in Harlem, U.S.A.,” Norwood said. “The idea comes from the way people say their life flashes before their eyes when they are facing death.

“In this play, just before Robeson dies, his father appears to him as a ghost, and what follows is a flashback of his whole life.”

Norwood said he based the elements of his play primarily on the definitive biography, “Paul Robeson,” written by Martin Duberman and first published in 1989, and on Robeson’s 1958 autobiography, “Here I Stand.”

The cast for the reading will portray seven distinct characters. Stanley Coleman, a speech professor at Lane Community College and an experienced actor, takes the lead as Robeson.

Robeson was born in 1898 in Princeton, N.J., to a black father who escaped from a plantation as a teenager and became a Presbyterian minister. His mother, whose family was prominent in the Quaker faith, was of mixed African, Caucasian and Native American ancestry.

Even in adolescence, Robeson already was a singer and actor, as well as an outstanding athlete in basketball, football and track. He became the third African-American student to enroll at Rutgers University, where he participated in football, debate and oratory.

Robeson studied law at Columbia University while also playing professional football, acting and singing. He practiced law for a short time before turning full time to performance, playing a large role in the Harlem Renaissance of the 1920s.

In the 1930s, he spent time in Europe where African-­Americans were treated with far greater respect than in the United States. Robeson became more politically conscious, especially motivated by anti-fascist struggles in the Spanish Civil War, and took on many more acting roles that dealt with the plight of the working poor as well as the struggles of Africans for political independence.

During World War II, he became an entertainer on behalf of the war effort but quit acting in films because of the demeaning roles available to black actors.

After the war, Robeson became a champion for civil rights and founded the American Crusade Against Lynching. He also became a staunch supporter of labor unions, and because of those activities he was called before the Senate Judiciary Committee and questioned about possible Communist sympathies.

The FBI canceled many of his scheduled performances, forcing him to return to Europe in order to make a living. Robeson traveled, among other places, to the Soviet Union, where he extolled the lack of racial discrimination there.

Back in the United States in the early 1950s, Robeson found himself blacklisted and many of his appearances — and his passport — canceled. Being named winner of the International Stalin Prize in 1952, for his criticism of the U.S. government and his outspoken advocacy of independence for African nations, led to more social and political isolation.

Nor did it help that after Josef Stalin’s death in 1953, Robeson wrote a piece called “To You My Beloved Comrade,” in which he praised Stalin for his efforts to secure peace and maintain political balance in the world.

Robeson was called before the House Un-American Activities Committee, where he refused to acknowledge or deny any political affiliations. After the end of the Senate career of committee Chairman Joseph McCarthy, Robeson wrote his autobiography, “Here I Stand,” and won back his passport.

Almost immediately, he embarked on an international trip that included time spent in the Soviet Union.

Robeson experienced mental and physical difficulties for the next several years — including at least one suicide attempt — before returning to the United States in 1963. He spent much of his later life in seclusion, although he made several appearances on behalf of the civil rights movement.

Robeson died in Philadelphia at age 77 following a stroke, lay in state in Harlem and was buried in the Fernhill Cemetery in Hartsdale, N.Y.

At the end of “Fell the Tallest Tree,” Norwood takes on the complicated truth about Robeson’s politics in a scene that recalls his real-life appearance before the Senate. But he also fast-forwards to forge a link with contemporary politics and, perhaps, Norwood’s own take on what Robeson’s views would be today, and maybe his own.

When the character called Senator tells Robeson, “You’re a bloodie commie,” Robeson responds, “I have never been a member of the Communist Party, not in the United States, nor in Russia.”

Robeson admits having said openly that “big wealth in the U.S. has been built on the backs of European immigrants and African slaves (and that) corporations and the rich have rigged the free market system to their personal advantage.”

“I say bring back all that excess wealth that has been hijacked from the free-market system and stuffed away into offshore accounts,” Robeson continues. “Return it to the American economy to benefit all.”

Robeson “was never a member of the Communist Party,” Norwood said. “He was about freedom of choice, freedom of speech and the ideology of labor rights and social and racial equality.”

In what appears to be a commentary on recent violence that has left black men dead at the hands of police across the country, Norwood gives Robeson a final speech.

The senator who besmirched his politics and his race “has no idea about the fight he’s in,” the dying man says.

“He will never whip the strength out of the American black culture. ... Black folks are built strong. It’s the only way we survive.”

Then the Robeson character offers a quote he attributes to his own father: “Do nothing to give them cause to fear you, (but) never let them steal your good name.”